After a week of voyaging, I return!

Putting to the test what I understood last time about SSH port forwarding , I built and “ran” a flutter app on my remote server with my physical phone connected to my laptop wirelessly via adb as the target device.

This is a case for remote forwarding. Because requests to a remote port are being forwarded to the local one.

To set up flutter, I decided I needed to clean up some space. I used a trick published on LinuxHandboox that I’d read during the voyaging

But it didn’t work. Some filesystem errors, but nonetheless I could use

that I discovered from some googling troubleshooting.

I was also cleaning out the home directory in my Termux environment and as tweeted today chanced upon a file named -. Just that. A literal hyphen.

What file is this? To answer as is second nature I ran

But that did nothing because cat interprets - as /dev/stdin and the standard input is empty, but there’s no EOF so the cursor just moves to the other line and stares at me.

Okay let’s do the pro move and use

Oh. file also interprets it as stdin. And I was thinking not enough Linux apps interpret - as stdin.

In the end, I figured it out with some fancy command line foo

Nonetheless it’s not sane to name a file starting with - (or just that) anyway. I’m pretty sure this happened by accident where I had tried to write to stdin but that particular command did not interpret - as stdin but rather as a filename and voilà … or oops?

I had to write quite a few mails in French. Normally I would switch to a US International keyboard with WinKey + Space. But this time I felt like I did want to use the verily French AZERTY layout.

So… now I get to go through confusing and unintuitive settings in Windows 11. Sure Windows 11 has a lot of cool things; but not all of the settings experience is fully polished; not yet at least.

A search for “keyboard” in Windows Settings looks quite promising

That’s exactly what I’m looking for!

And now in the new screen I see it makes sense to choose the option called Typing, right? 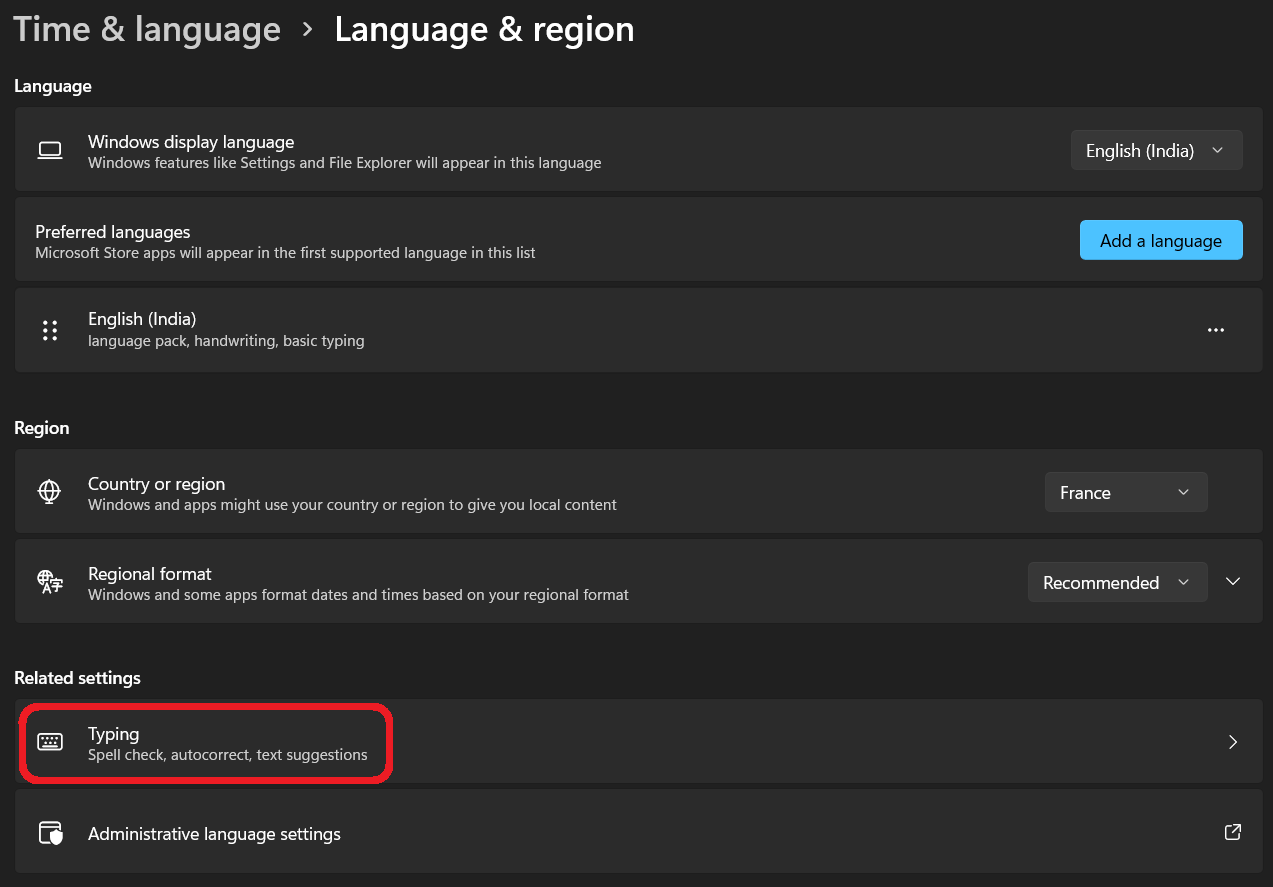 Oh look! THIS should be the one, right? It says 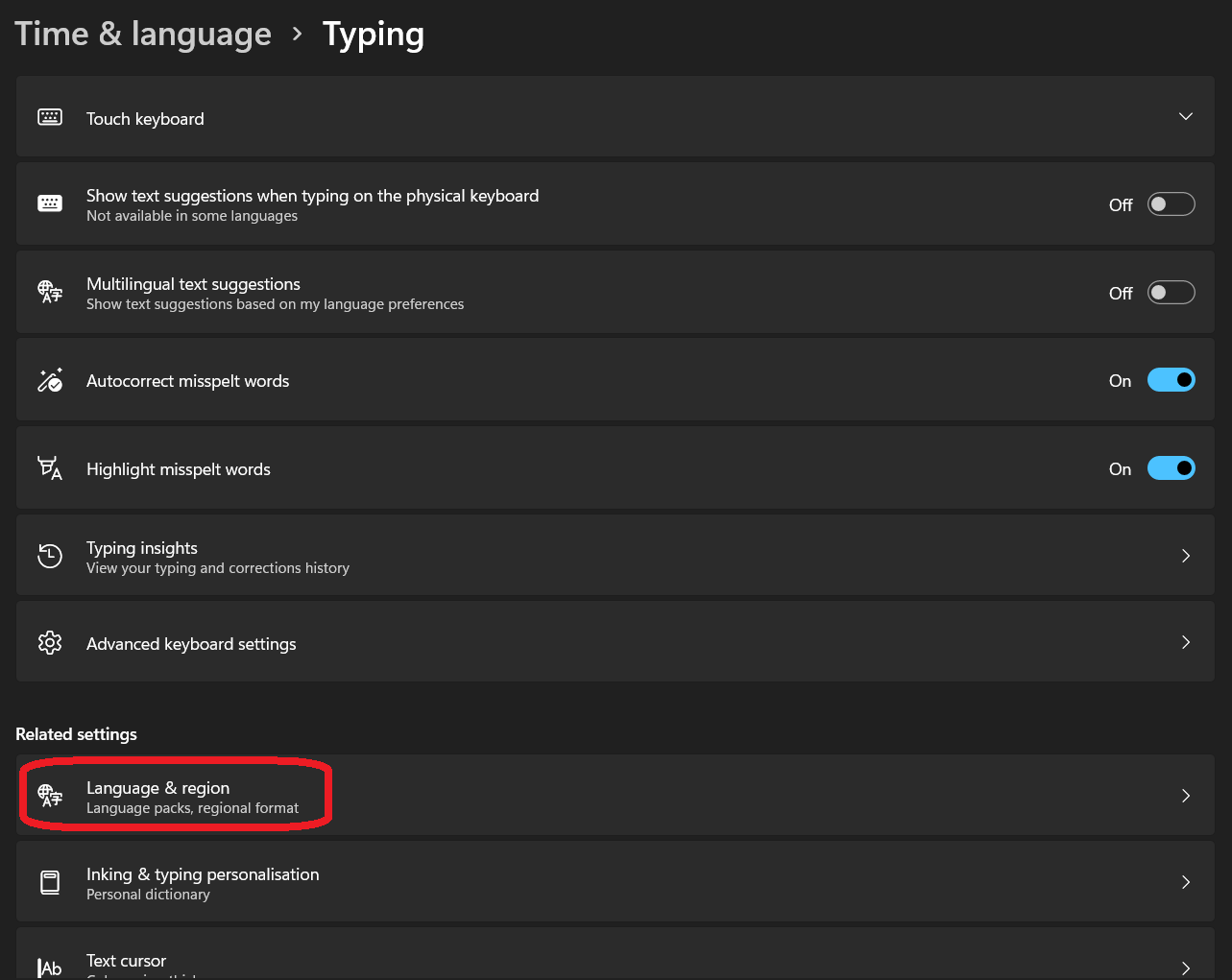 I just came back to where I started. The Language and Region settings page.

Turns out you’re supposed to open a language from the… Language section and add a keyboard. Or just add a language like I did and automatically get the default keyboard of that language

But that does not explain how I have two languages not in the list, each with their own keyboard layout show up when I open my Keyboard Layout switcher. 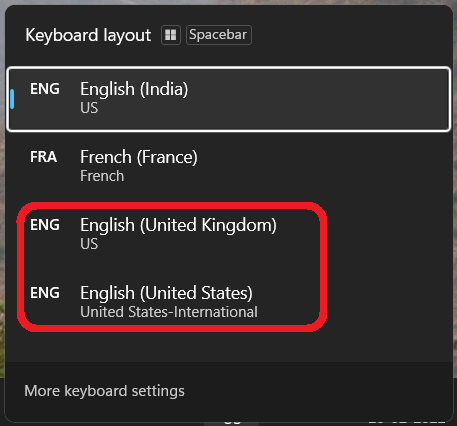 what a good thing a diary is!

(Don’t tell my mother I said this.)

I referred back to recall how I managed to make post_url work.