The Problem with bluetooth peripherals

Bluetooth is not too bad. The connection is quite stable once connected. But connecting is not always the fun part. And sure there is probably a little bit of latency. Not one that I can perceive. I just type, point and click on links. And best of all, no wires!

The real problem for me is that bluetooth connections are made at the operating system level.

Bluetooth and the operating system

I did not actually know that bluetooth was OS-level until I came across this bit in the Arch Linux wiki (the best Linux docs, ftw) about pairing for dual boot

To pair devices on dual boot setups you need to change the pairing keys manually on your Linux install, so that they match in both systems.

Okay to be clear, the connection is done between hardware, obviously. But the pairing is handled by the operating system. And pairing keys are linked to the adapters.

This is not a problem when your bluetooth headsets have only one invisible operating system; or one phone with one OS. But with a dual boot system, you need to copy the pairing keys so both OSes share the same keys since because assuming that the computer shares the bluetooth hardware, the MAC would be mapped to a specific pairing key on the other device.

But this is easily solvable. I do it all the time on my personal laptop to connect my headphones to both Fedora and Windows.

The real problem for me

is that I could not switch between OSes without using another keyboard. I would need to press keys at the GRUB menu to change OSes, but that would not be possible with a bluetooth keyboard because connections are OS-level, not at the firmware level.

So GRUB has no way of receiving this input.

I assumed that connecting or pairing would just be plug and pair. Those are the kinds of receivers I had used so far. The device came with one dongle and worked only with that one.

But instead it wanted some software??? Oh no. I thought it meant I needed the software everywhere, and that it would immediately mean no Linux compatability and definitely not working in firmware.

StackExchange to the rescue

Google played a minor role too

Looking up “Logitech Unifying + BIOS” gave me the answer I needed. It was possible to use the the keyboard with the receiver in firmware menus!

I took a look at YouTube also because Logitech has a pretty good stock of content on their channel. And WOW those videos are OOOLD! 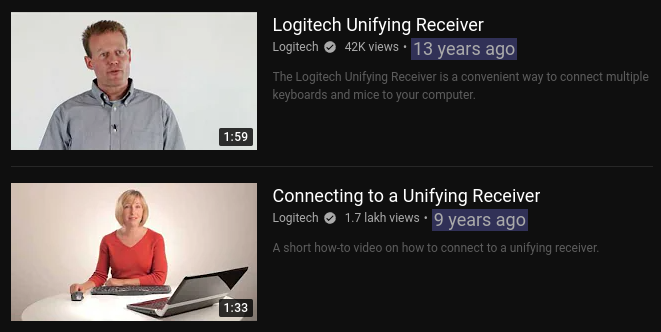 That is so cool!

Connecting via the Unifying Receiver

Turns out the special software is needed only to make the connection. The pairing process so to speak. And this time the pairing information is stored on the receiver itself; not the OS. So it becomes possible to use it on any system, it just reports itself as a regular old wireless keyboard and mouse!

I can use it in firmware, GRUB, Linux, Windows. And even on a completely different computer because now the device is paired with the receiver, not the computer.

That I did not know this before.